A Day of Surprises

Oftentimes when coming up north, as we are driving down Ed's road and approaching the lane that will take us back to camp, we find ourselves thinking wistfully, "wouldn't it be nice if, by some amazing miracle--or shoe-maker elves, we should find the driveway magically repaired". 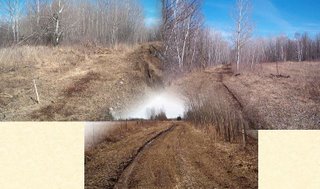 Well I'm here to tell you folks that dreams and wishes can come true! For on this day, as we arrived we found that a bulldozer had been used to plow the road, two cars wide, all the way back to the very end of the lane.
It looks as though either a developer has been brought in to build some cabins in the back, or the folks who have property back there have decided to expand or maybe even build a resort. 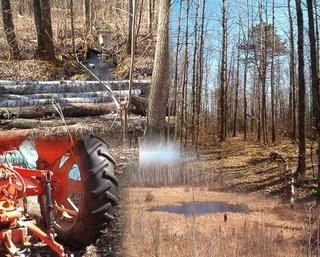 There is much dozer work completed back there in patterns that suggest multiple cabin placements are imminent. If that is, in fact the case, they will require a decent road for access which means that the ruts will likely be filled in this Spring or early Summer by professionals (or at least those with the equipment and know-how to do so) and we won't have to do it ourselves.

This was, as you might imagine a very exciting find for us, since up to now, we were in the belief that we were alone in the desire to fix the lane and make it passable for normal cars so we wouldn't have to keep parking half a mile away and hiking back into our campsite. 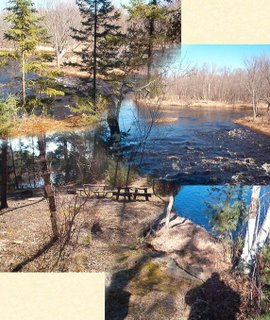 We put in about 4-5 miles of hiking today, going all the way back to the Eagle Bluff area and snapping some photos and then coming back and hiking down to the meadow to do some scouting around there. An eagle flew directly overhead the campsite again, so I am convinced that its eyrie is very close by. No campfire today as it was in the mid fifties but we did get some target practice in. We put the new adjuster bar on the tractor and ran the tractor up and down the lane a bit.

After a day of hiking, shooting and filming we decided to see if the Munger Bicycle Trail is paved all the way out to Duluth. And wouldn't you know it, I made a wrong turn and we lost the trail. But it was such a nice day we just kept on driving and eventually ended up on highway 23 heading north. 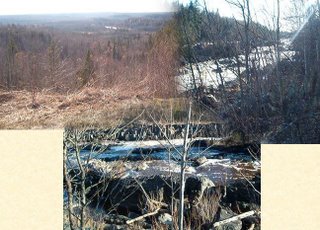 There, we found ourselves again surprised as we came across the old Lake Duluth Reservoir region which is now known as the St. Louis River Valley. There was an overlook there that offered an amazing view over the valley (see collage). After taking some photos there we continued north along 23. At the point where the road crosses over the river and just after entering the outskirts of Duluth, we turned left and followed the river road up, down and back up the mountains of Jay Cooke State Park and shot photos of the St Louis River rapids and falls. We saw much deer in this area (and nearly hit a couple) and the views were spectacular!

Eventually, we did come back across the (yes!) paved Munger Trail running along highway 210 out of Carlton. We followed it back, for the most part into Moose Lake and found where I'd made my initial error in direction. Then it was, fill up the coffee mugs, and head back home. All-in-all a long, yet surprisingly satisfying day.
Posted by H at 9:20 PM No comments: