We’ve all been there. You find you need extra storage but, it’s mid-summer and what with graduation parties, weddings, vacations and family reunions, you just simply don’t have the $200 or $300, at the moment, for the cost of a new shed kit, not to mention the $100 or more you will need for wood and supplies for the base. The solution? Look around to see what you can find that you can recycle and breathe new life into.

That’s what we did and we saved more than 90% off the cost of a new shed. Here’s how we did it. My brother John, was tasked by his landlord with clearing out an old dilapidated shed from a tenant that had been evicted from their rental community. The shed, while yet intact, was laying over on its side. He called our brother David and enlisted his help to load it up on one of our trailers and haul it over here to the camp. It was pretty beat up, but they worked on it awhile and soon got it straightened out.

Then, because he works for a prominent hardware outlet, who tosses out older pallets, some of which retain usability, he managed get some for us, at no cost. The pallets that are yet basically whole, we keep for things like bridges, deer stands, decks, etc. The rest, we piece out for various other projects around the camp. The broken-up stuff makes good fodder for the fire-pit.

Finally, for the price of doing the work to clear them out, he scored a load of building bricks. Once again, no out-of-pocket cost. So, the lesson here is, keep your eye out for opportunities and don’t squander them! Since I already had a screw gun and screws, all I needed now was a couple of 4x8 sheets of plywood and, as it turned out later on in the project, some wasp spray. Combined cost, $30.

We started by laying out the brick pattern for four 48”x40” pallets. Then, using only a pick, a flat-bladed spade and a level, I cut the sod and dug out the patches to fit the bricks in such a way as each pallet laid level on top of them. It took a few hours but in the end, I had a level pallet base, eight feet wide by six feet eight inches long.

Then, David and I laid out the two plywood panels on top and screwed them into the pallets below. After that, using a hand rip saw, I cut off the remaining excess plywood. Now, we were ready for the last step, moving our repaired metal shed onto the base. 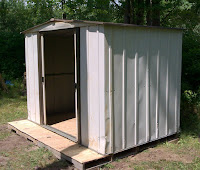 That’s when the wasps began to bite. David took three stings before we realized what was happening. Fortunately, he does not have an allergy to wasps or bees and we had some anti-allergy topical ointment medicine on hand. I went to the store and picked up the wasp spray and in minutes, we were back to work.

Basically, because the shed has no bottom, we simply stood inside and lifted it by the “rafters”. Then, we walked it over to the newly built base. There, we lined it up and screwed it down to the plywood edges. Lastly, we removed the plastic runners which the doors use to slide open and closed and re-seated them in their tracks. Finally, we reattached the doors to the runners while making certain they were properly slotted in the base track. After a little clean up, the result is a solid, working shed. 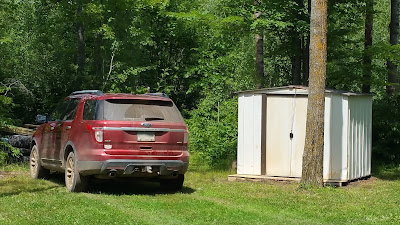 Posted by H at 7:37 PM No comments: Links to this post

This is a fantastic recipe for easy preparation in the Camp or at home. Turn an ordinary, ready-to serve side dish into a full-blown meal with just a few additional ingredients. A great one-pot dinner making clean-up a breeze. 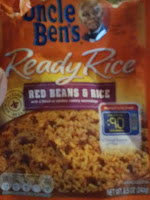 In a medium-sized saucepan, add a tablespoon of olive oil and the onions cut in small dices. Season with a bit of rosemary and garlic salt and sauté until translucent. Thinly slice up the sausage and add it to the onions. Continue to sauté another one or two minutes, stirring regularly until the sausage is nice and hot.

De-glaze with the vinegar and tomatoes and simmer until hot through and through. Add the two pouches of ready-to-serve Red Beans and Rice and cook, stirring vigorously for another couple of minutes.

Serve as is or with a garnish of your favorite shredded cheese.

Serves 2-3 (for 4-5 servings add an additional pouch of the rice and another half of the sausage).

Posted by H at 7:30 PM No comments: Links to this post