Well, the hunt did not go as well as we had hoped. The first wee was OK, not being to very cold or having too bad a weather situation, but it seemed like the neighbors, who were camped right on the State Park Line were shooting every thing that came up out of there and we hardly saw a thing. I let a little wee one go and never even saw another all season. John shot a smallish button buck which we turned into some really tasty ground meat and sausage, and on the last day, Tom pulled off a nice shot and got a spike.

W are planning to try some differant stuff this coming year which should put us back on track, including starting out in archery season which puts us there long before the neighbors and should give us a fighting chance and some Spring and Summer plantings that hopefully will create a draw for the deer across our property from a different direction from the State Park and make it fair for all concerned.
Posted by H at 11:28 AM No comments: 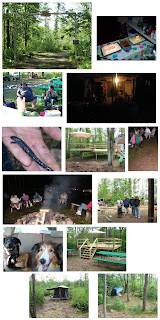 As noted in my previous posts, there was much work to do. Rob and Vicki came out early last week to both settle in and get started on some of the tasks. Rob and John did some major clearing around what is now being called the camping area, or camp grounds. This is the area directly to the south-west of the cabin, in amongst the trees of what might be called the side yard. Rob also stabilized ans built on to his 10x16 platform creating a small front porch for it, as well as a real nice step for the side door. Later on, due to weather issues, we were forced to also add a big 18x20 tarp over it to protect it from the rain and wind.

Rob, John and I finished the 10-foot section of the Pavilion Deck and mounted the Gazebo irons and roof to it. John had to welt it in a couple of places where it had broken. Then we set about putting up a somewhat sturdy, if not very pretty guardrail around it finish it off, at least for this year. Rob then set about assembling the 10-foot picnic tables which he later painted in a nice green. He also painted the smaller picnic table and the front door. Rob also built a ridiculously sturdy little coffee table that I may just keep as a firepit table or something. John continued to work on the roads as much as the weather would allow and he also welded the futon bed up that I brought with me when I arrived. Mom, Vicki and I, when I wasn't mowing, made further preparations for the upcoming party event.

Mom hung her curtains which look fantastic! They have a real nice deer print on them. Mom and Vicki also organized the cabin and picnic areas and Mom bought a nice canopy for to cooking area to protect from the rain. Dan came up later in the week and he and John worked on the signs for the party. We ended up having to hold all of the cars at midway down the Pine Hill Trail and had to go out with Our 4x4s to ferry folks in. This was due to the rains that simply wouldn't stay away and left us with nearly car-sized, foot deep puddles to wade through for most of the road back to the driveway.

The Party was a blast! We had a fireside bar-be-que on Friday night with cake and beverages and music. The Helseths were represented in fine style by Mom-Irene, Donna, Deanna and Al Kunitz and their daughters. Speaking of whom, Emily came with her new husband Keith Miller. Thanks guys! Also my kids came and Dad and Ma and Janell were there. Of course, along with my turning 50 this year, Ma turned 73 on that following day and so we carried the festivities on into that Saturday with Bar-be-que ribs and chicken, cold salads and fruit. We finished off the day with another bonfire and some wind-down time as most of the party goers had gone by that evening.

Unfortunately, due to the limited number of beds we have and the rough camp grounds and the weather we were having, many of our folks had to stay in hotels for the night. Next time, we expect to have a bunk house completed, along with smoother campgrounds, more tarps to cover tents and a better road down which to travel. Also on the docket, a Finnish Sauna and possibly, a 8-10 person Spa. But first, a well.
Posted by H at 11:26 AM No comments: 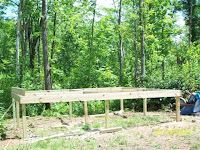 Well, we are at last in the process of rebuilding the gazebo. Actually, as you can see by the title, we have taken to calling it the Pavilion Deck, or simply just Deck. This is due to the fact that the "gazebo" portion is only going to be a small part of the deck itself and will more resemble a rectangular pavilion than a polygonal gazebo. On the first weekend of July, I began digging 9 of the overall 11 3-foot holes that would be used to hold the poles for the deck. The first row of these I managed to get cemented in by the end of my stay.

Two weeks later, John, Mom and I went back up north and while Mom started working on cleaning the cabin and measuring the windows for the new curtains she is making, John and I finished leveling and cementing in the remaining poles. Then we laid on our outer frame rails and the inner cross rails and made ready to receive the primary joists (see first image). We, John and I also added a project to our weekend to slightly move, widen and deepen the firepit. Now, in its new location, it is more visible and accessible to the front of the cabin, while remaining a safe enough distance from it. Also, it is now roughly five feet across, 1 foot deep and is surrounded by 1 ring of stones. This will allow us to have some really lovely bonfires this Summer. 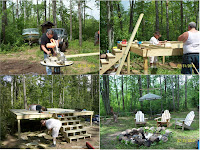 Another two weeks has gone by and this time Dad joins the three of us and helps John and I finish the lower (or main) deck. John and I had also built a rather sturdy set of steps to front the deck and provide easy access to the platform. We installed joist hangers and used pressure-treated wood to create the structure. We used 16-foot deck boards to clad the deck with and built a special joist setup so we count wrap the entire deck in mitered decking boards to give it that "picture-frame" look.
Posted by H at 9:53 AM No comments: 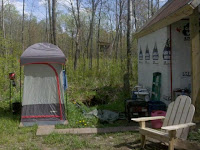 Not much to report from the property up north this Spring. In April, John purchased a Camp Shower Tent for our Zodi Camp Shower unit and set it up next to the cabin, on the unused tiles from the Gazebo, which we took down to make room for clearing the front and side yards around the cabin. He even built a little sidewalk to get to it from the Cabin porch.

We also, by request of brother Rob, built a 10x16 platform for under his big tent that he is bringing with him this year. We are planning a big get-together reunion of family and friends to celebrate my 50th birthday. So we are working madly, to get the camp ready for the big weekend. While my birthday is on Friday, August 13th, and yes we will be partying a little that night, we are having the big party day on Saturday, the 14th.

We have also begun work on the new Gazebo, which will be a rather large affair measuring 16 foot square on the main landing, roughly 3 feet off the ground, and having a step up to a 10 foot square situated on and hanging over the corner of the bigger platform. To this square, we will rebuild and recover the metal gazebo structure that we have stored away. Eventually, there will be a roughly 5-foot staircase off its back side that leads right down to the trail that goes over our little creek bridge.

Finally, we have 2 big 10-foot picnic tables to construct, and trails and clearings to mow to get ready for the big weekend. Much to do! Much to do!
Posted by H at 8:30 AM No comments: