Well, we did it! We had our first reunion of sorts up at the camp. Mostly it was a way of celebrating birthdays and family and just a darn good reason to get together. Uncle Al, Aunt Ruth and Rosie came out from Pennsylvania and Rob and Vikki came up from Michigan. Tom and Susie and his kids also stopped by and Deb and her kids William(and his girlfriend) and Janelle were there as well. My own kids, Amanda and Josh also made it up along with John a good friend of Josh's. Of course Dad and Ma (it was her 70th birthday, my 47th) were there and Mom brought Sheila up to join us.

On the evening before the big Saturday get-together, Uncle Al, Dad and Rob went up early to get the camp area prepared. 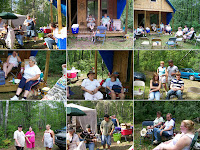 Uncle Al and Rob wanted to throw in their own effort to helping with the camp, so due almost solely to their efforts, they virtually doubled the cleared area around the camp. A new picnic are was established. All of the logs were shortened and re-stacked in a neat stack. The grass was all mown and the fire pit relaid so it was more stable. The fire pit area was cleaned up and space for up to 8 cars was made! It was fantastic work and I am very grateful.

The party day itself was a huge success with food and music and stories and conversation all around! And the best part of it all was that no-one got hurt(which is often a common occurrence at family get-togethers)!