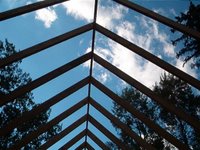 On the weekend of the 11th a bunch of us came together to spend the first night(s) in the cabin. Even though there was no real roof, we threw a couple of tarps over the open spaces and slept in the cabin for the first time. This was the weekend of the Sandstone Quarry Days so we went into town and watched the parade and shopped the booths at the street bazaar. Mom and I went back home on Saturday while Dad and Ma (Mary) stayed up for another night. 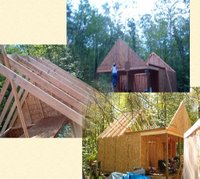 This past weekend, brother Dan joined Dad and I up at camp and together we put up the rafters. Since we only have two 6-foot ladders and no real scaffolding, we were forced to get creative. On a previous weekend, Dad and I had taken some of the rafter materials and used them to make a rudimentary scaffolding ramp to span the space from the loft edge to the back gable. We threw about 4 sheets of OSB upon this ramp to give us something to walk on. You can see it in the composite picture on the left. Then we made the decision to build the roof in 4 sections. We figured (and as it turns out correctly so) that that was about as big as we could handle by ourselves. 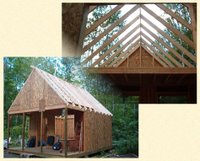 Dad notched the rafter bottoms to which we nailed 1x4 base plates so they would rest upon the wall top plate and then cut 45 degree angles in the rafter tops to receive a 1x6 crown plate. These we built up on the loft. Then while Dan manned the ladder below and Dad walked out across the scaffolding and I worked from the loft main, we walked the first of the back roof sections into place on top of the southwest-facing side wall and the back gable. Once we had it flushed down, we nailed it into place. Then we turned around and repeated the process for the northeast roof section. After that we had to make some adjustments to get things to fit properly and then we nailed the two 1x6 crown plates together. We did make sure to make 1 of the crown plates 2-feet longer than the other so we could create an overlap for the front roof sections. Finally, we dismantled our rudimentary scaffolding and created the 2 sections for the front repeating the process we had used for the rear roof sections. At last our rafters are up and ready to be sheeted.
Posted by H at 7:27 AM 2 comments: 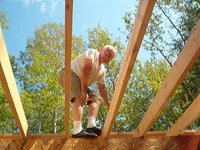 As part of installing the roof, we first needed to lay on the loft. This was no easy task for just two guys. We put together 9 2x6x10' joists plust 2 2x4x10' stabilizer beams and 2 16 foot 2x6's as front and back plates. This was the loft, weighing in at around 300-400 lbs. It took quite a bit of effort just to get it stood up against the front of the cabin. Then after a couple of aborted attempts at using a come-along to lift it up, we settled upon the fact that if it was going to get up there, we were jut going to have to lift it. And so we did. It took just about all we had to lift it up over our heads to where part of it was on the edge and part was still in our hands. Then Dad ran into the cabin and began cranking like mad to get it pulled up. Just when it left my hands, I reached down and grabbed a short 2x4 and used it to shove the platform up level so the come-along could more easily pull it along. Finally, after some body-wrenching jerks of movement, we were able to wrestle the loft frame into place so it could be nailed down. 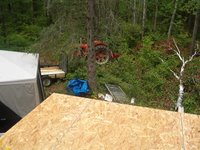 As we were getting ready to put the sheet down, just overhead two eagles winged into view doing what I suppose was a sort of mating dance in the sky. The larger one would appear to stall out and fall tumbling and then catch hisself to ride the thermals back up to where the smaller one was soaring aloft. It was quite a site. 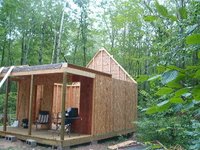 The next day we got the two gable ends framed and the rear one sheeted. Then we lifted them onto the loft where we then built a rudimentary scaffolding. After that we slid the rear gable end out to its position, lifted it up and nailed it down. Finally, we added some supports to hold it into place until the next build day, cleaned up and headed home for the weekend.
Posted by H at 11:35 AM No comments: