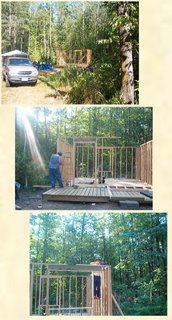 This makes the second or third construction weekend in a row with temperatures in the 90's. We even weathered a 4-5 hour thunderstorm overnight.

The first night (Thursday) we managed to get the 2 front wall sections built and ready to install. Then we made camp and turned in.

The next morning we installed the front wall and proceeded to lay on the sheet. We sheeted all the way around the cabin leaving only a very small section under the front wall window which will come from a piece also cut for the roof. 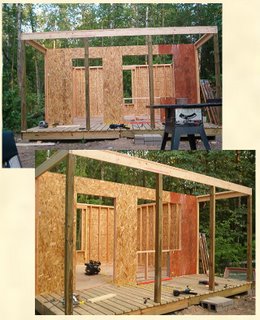 Finally, We capped off the day with the final top plate and porch posts. At last, we are ready to put the roof on!
Posted by H at 9:38 PM No comments: Links to this post

Three Walls And A Floor 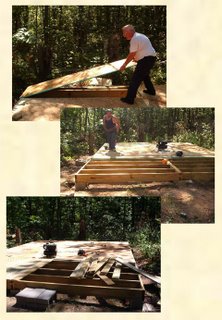 This week we managed to get the floor down. It was great to sit on the new porch for the first time. We also got three of the four wall frames up. Short text this time. More later. 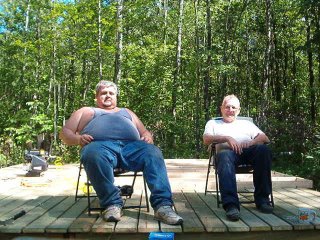 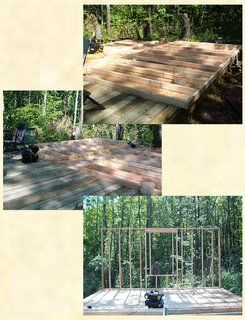 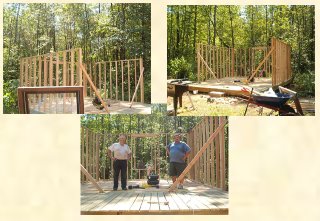 Posted by H at 1:20 PM No comments: Links to this post

Platform Base Is Complete

This weekend was a big one! We came up on Sunday afternoon after dealing with some minor car trouble that Dad had right after church. We had to stop at 2 different Menards stores to get the stuff we needed and settled mostly on getting the remaining cement we needed to finish off the pilings (Dad decided that we should cement them in even though the ground seems plenty rocky enough) and a picnic table with 4 chairs and an umbrella that I gave him for Father's day. On Sunday afternoon we fished, put up the table, mixed and poured all of the cement and hung the solid panels for the gazebo that Debbie gave us so we wouldn't get too wet when it rains (which, of course, it did!).

On Monday we began with the platform and by Noon had the sections directly under the cabin completed. After lunch we got right back on it and built the remaining porch sections completing the platform all in one day by 4:30pm! I personnaly think that for 2 guys, who normally do not do this kind of work, using 2x8 green-treated wood and doubling up on the cross-sections, that's a pretty decent feat. We did a little more dirt scratching and weed cutting this weekend. We also went for a short swim in the lake that the dam at Willow River forms, and caught some baby fish there (again, nothing big enough to eat). That night, I heard a bear in the distance. Dad suggested that it might have been a moose, but as it happens, I caught a wildlife show on Tuesday which featured bears and it was clearly those noises that I heard.

Next week, we intend to purchase all of our remaining framing supplies and bring them up. Also, it is our plan to lay the base floor and erect the walls then, as well.
Posted by H at 8:43 AM No comments: Links to this post