The Family Get-together this past year came and went rather quietly due to scheduling issues around Dad's latest open-heart surgery. Even though he was opened up twice in the same day, his recovery was inconceivably quick and as a result, he was able to spend the day with us after all. Consequently, August passed without much more ado and September arrived before we were even aware. 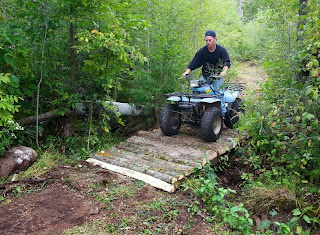 Our final projects of the year involved rebuilding the bridge over the creek behind the deck and building a sitting bench behind the deck facing what will eventually become the ash cemetery. The only hitch however was my desire to do these two building projects the same way they were done in the pioneer days, using wedge and sledge.


The task involved the use of three 8 foot oak logs for long lasting support and digging out the banks on either side so that the log beams, once laid, in parallel fashion would reveal a level top-line for the cross bars to rest upon.

Next, each cross bar, measuring 5 feet in length, was scored lengthwise with an axe head or wedge. Then, we continued to work the wedges up and down the score line, hammering deeper and deeper with the hand maul until the log split apart right down the middle.

Finally, in order of thickest to thinnest, we worked from the middle out and nailed the cross bar halves directly into the 8 foot beams using 6 inch barn nails. This, of course did not come about without mishap.

Our niece Malissa's boyfriend Brian came out from Michigan to get work so we could bring Missy and the kids out with us. He happened to be with us on this day building our bridge when, while digging out the end holes for the 8 foot beams, and attempting to pry out a large rock that was in the way, Rob slipped off the beam and his shovel handle flew right into Brian's face causing a pretty severe contusion under his left eye. 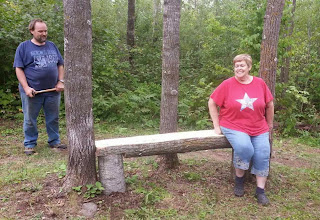 This caused us much concern for a bit, but we are well stocked with first-aide gear and Mom, with her nursing experience patched him up pretty quickly and so well that he didn't even require stitches. Merely a butterfly was all that became necessary and soon we were back to work.

At last, with the bridge complete, we turned our attention to making the log benches we've been planning. And so, using the same technique, we built the bench on the path to the bridge that back-faces the ash cemetery. We will be placing the other bench below the cabin down by the creek for use when we put in our horseshoe pits and boxes next Spring.