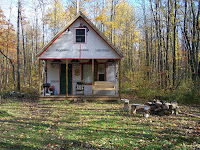 John went up north to spent a few days and nights up at camp and Dad decided to join him for the first couple of days. They cleared the stumps from around the cabin, pulled out and cut up several trees that we had felled last year and built a lean-to to house the longer logs as they dry.

John also cleared a space for his own future cabin down near the big Red Pine. They also took the time to finish the 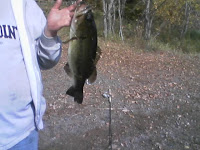 loft floor and wrap the cabin in Gorilla wrap, not to mention seal the open cracks with spray foam. John reports that the cabin is now pretty air-tight and easily 10 degrees warmer inside than outside. They also managed to get some decent fishing in.
Posted by H at 6:54 PM No comments: Links to this post