Autumn in the Hollow 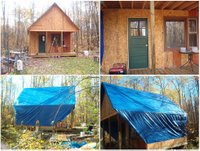 October is almost here and there is a definite chill in the air. The leaves have begun to turn in the southern part of the state, while they have nearly all fallen away up north. Dad and Ma had gone up to camp last week and he took the opportunity to pack away the Gazebo and to get some of the other tools put away for winter, while I picked up a 26x40 tarpaulin for use as a cover for the cabin. Then, just this past week, Dad was able to pick up a really nice door that was being replaced and was going to be thrown away! I mean, sure it's a little old, but it still has plenty of life in it yet! 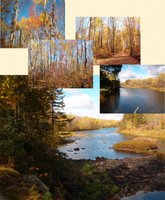 So, this weekend we hung a door -- a green door on our cabin. Also, we pulled an enormous tarp over the top of the building and tack-nailed and stapled it down as a protection measure against the coming winter. Then we cleaned up the camp even more, moving all of the remaining heavy tools to the shed and all of the camping supplies into the cabin. We spent a very cozy night in the Cabin by the heat of our KeroSun heater, even though a slight draft still managed to squeeze beneath the window sills. And, even though it rained for much of the night, we remained worm and dry and comfortable. What a fabulous thing it is to have a cabin!

While we were up here, we took some time for a long walk down to the River and along its banks. I hope you enjoy the collage of images we made of our beautiful northland hideaway. 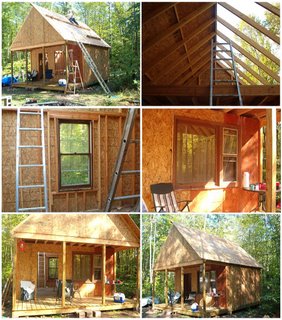 Well, it's Labor Day weekend and here is what we have accomplished thus far. On the weekend of August 26th, Dad and I went back up and put on 1 half of the roof. It was extremely slow and labor-intensive work as about 70% of it is wrapped up in building scaffoldings and moving ladders. As Dad is the lighter of the two of us, he ended up doing nearly all of the sheeting while I did the ground work which involved moving equipment, cutting wood, stopping and restarting the generator (to conserve fuel) running ladders around and handing up material. At the end of our weekend, we were both too exhausted to do the second half, however we did manage to retain enough energy to put in the two windows we have.

This weekend, we finished off the other half of the roof and laid the felt over it in as much as we had enough to cover all but the last 3 feet or so on either side of the cabin. We also cleared the campsite a bit to make it more presentable. We used an old 4x8 sheet of plywood to cover the door opening and just tacked it into place. Boy, I can't wait to get a door on the cabin and start using it for real!
Posted by H at 7:55 AM No comments: