Putting in the Pilings 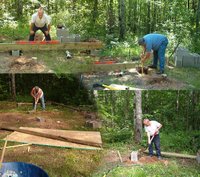 We put in the Pilings this weekend. It was a goodly bit of work, but it went well and there were little or no interruptions. We saw some herons mixing with some cows in a local farmer's field. We also caught a couple of fish, but not sizable enough to keep. We decided to use the Gazebo as our impromptu tent until the cabin is built. We weathered a late-Spring thunderstorm overnight by moving our cots into the center and keeping an eye on the grommet holes in the nylon top. By morning, the storm had passed and we were ready for breakfast at our favorite restaurant in Sandstone. 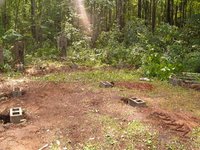 This week, it's mostly about the pictures. The first one shows the pilings in various stages of development while the second one shows the completed work (at least for this week). Take note that we also managed to get all 10 trees that were directly surrounding the cabin site cut down, so we are currently looking for volunteers who like to use chansaws to help cut them up into stacked logs for firewood.
Posted by H at 8:16 AM No comments:

Dad and Ma bought a gazebo for up at camp so we could both have a nice place to relax from the mosquitos and have a comfortable sleeping area other than a low-to-the-ground, leaky, dome tent. Deb says she has solid panels for 3 sides of the gazebo which we will get from her and put on later. I want to also mention that Katherine's Husband Scott and son Bryan wanted to take a

look at the campsite so Dad took them up to have a look.
This would be about a week or so ago. Not only did they get a look, but they got a huge surprise in that they found that bigger equipment had been brought in and the road had been worked on so much that it was drivable all the way back to the far back properties. They also decided to help us out with the cabin and so they dug all of the holes for the foundation pillars that we will use for our cabin! And believe me, that is no mean feat! This ground is as hard and rocky as you might expect from land used to quarry sandstone blocks.

Thank you so very much boys!

So, since we had a nice gazebo to put up, we decided to get some nice floor stone patio tiles to put it up on. There were 64 of them each weighing in at around 42 pounds each. We also picked up 27 cement blocks for the cabin foundation piers and a few bags of quick-crete to solidify them into the ground. Once we had all of this stuff sitting on our trailer, we realized there would be no way we would be able to take all of this stuff up to camp at once. There were over 3600 lbs of material on the trailer! We managed to get across the parking lot and into the next one and made the decision to go and get the pickup to carry half of the load. So, Dad and Ma went for the pickup and I stayed behind to watch the load until they returned. Then we transferred half the load to the truck and the next day took both vehicles up north. 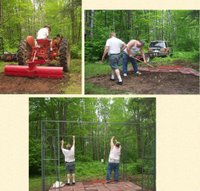 We had Mom, Janelle and myself in the wagon pulling the trailer and Dad and Ma following in the pickup. After a nice breakfast at Pam's Place in Sandstone, we went back to camp and found that the road had been worked on even more since the last time. We had no trouble just driving right on into camp with our loads and taking them all the way back to the campsite (Yeah! No more parking at the top of the road and hiking back). 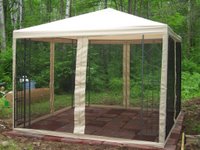 scrape a nice area in front of our growing cabin materials pile. Then we raked and laid out the square tiles for the patio. Finally, we unloaded the remaining materials from the trailer and pickup and began putting up the gazebo. Voila! In just 3 hours we had scraped and leveled the area to build on, unloaded all of our material, laid out our patio and erected our gazebo!

Later on, Mom and I went further north to Virginia, MN to the Craft Festival they had there and Dad, Ma and Janelle went back home. We decided to leave the trailer up north and retrieve it on our next trip.
Posted by H at 6:50 AM No comments: